Aqueous solutions that contain an acid, alkali (base) or salt are known as electrolytes. Pure solvents such as distilled water are poor conductors of electricity. When an acid, base, or salt are dissolved in water, its conductance of electricity is increased significantly. The conductance of any solution is the result of the actual movement of ions through the solution to the measuring electrodes. When two electrodes of an electrical circuit are placed in the solution, the cations (+) are attracted to the negative electrode (cathode) and the anions (-) are attracted to the positive electrode (anode). Changes in the conductance of an electrolytic solution result from concentration and mobility of the ions present.

When electrolyte temperature is increased, ionic mobility is increased causing greater conductance or a decrease of electrical resistance. This is the opposite of a metal where resistance increases with temperature. Indeed, some metals, such a copper, become super conductors (absolute zero resistance) a few degrees above zero degrees Kelvin (absolute zero), as engineered in the magnets of MRI facilities.

An example of real conductivity measurements taken from the Handbook of Chemistry and Physics (1947) of a 0.01N solution of potassium chloride (Kcl) illustrate the effect of temperature on electrolytes.

This is all very fundamental and is taught at the most basic level of physical chemistry. However, ions in solution (electrolytes) begin to explain what a bioelectrical impedance analyzer (BIA) measures.

BIA resistance is the measurement of ions in an aqueous solution that exist in any biological material living or dead. In a whole body BIA measurement, the concentration of cations ions (Ca, K, Na) dissolved in water are strongly related to total body water and fat free mass that are dependent on human regulatory functions and temperature. This is not true for reactance, which identifies dielectrics in the same solution that are characteristic of cell structures (see potato experiment).

[1] Mho is ohm spelled backwards and has been changed in favor of “siemens”.

One liter of a 0.01N potassium chloride (KCl) standard solution was prepared using a precision scale and distilled water. Precisely 500 ml of this solution was then added to a Pyrex container which was then placed above a burner. The container was lidded in an attempt to reduce the loss of solution by evaporation. 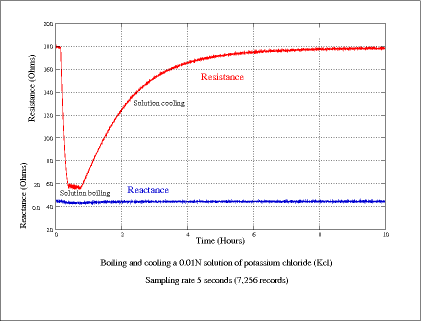 A close inspection of the data shows a slight downward slope in the resistance measurement while the solution is boiling. It is also apparent that the resistance at the end of the experiment is slightly lower than it was at the beginning; Resistance started at 179.6 and ended at 178.2.

When water boils, it is converted to steam. In a sealed container, the steam builds pressure until it finds a way to escape. In this case, some steam was seen to be escaping through the holes that the electrodes were inserted. As the steam escapes from the container, less water is left behind to contain the KCl. As a result, the concentration of ions is increased, causing conductance to increase and resistance to decrease.

A bioelectrical impedance analyzer (BIA) measures the concentration and mobility of ions in solution as a resistance vector. Pure ionic solutions do not have reactance because they do not contain cells. Therefore, reactance does not change and is independent of the resistance measurement.