All living substances have electrical resistance and reactance (capacitance) that can be measured. This includes humans, animals, fish, plants, fruits and vegetables. A living substance must have a metabolic process where oxygen and nutrients are passed into the cell and carbon dioxide and waste are passed out of the cell.

The cells of all plants and animals are surrounded by a cell membrane which acts as a protective skin for the cell, keeping cytoplasm inside the cell. It is selectively permeable and transfers certain ions and molecules to the cell cytoplasm.

Plant cells contain a number of structures that animal cells do not. A cellulose wall surrounds the cell and is immediately outside the cell membrane. It provides the cell with strength and rigidity and offers the cell protection. The cellulose wall is what gives plants their “crispness”.

An Idaho potato is an example of a living vegetable that has a rigid structure. The measured resistance and reactance of a typical potato are about 120 and 175 ohms respectively, depending on temperature and electrode configuration. Reactance is alway greater then resistance when the potato is fresh and hasn’t been cooked or frozen.

Two pair of stainless steel electrodes (1/8 inch dia) were inserted at the ends of the potato. The inner electrodes are the detecting electrodes and the outer electrodes are source electrodes. Two different potatoes are used to illustrate the effects of cooking and freezing on cell health or quality. A short lead set (3 ft) is connected to the four electrodes from the Quantum Desktop. Sampling rate is set with with the keyboard and initiated with “r” (run) key at a convenient time of day. The instrument then accumulates a time stamp, resistance and reactance measured values with 0.1 ohms of resolution in its internal memory.

Once the experiment (Quantum Desktop) is set­up it can run unattended from seconds to months keeping track of time and values. When the experiment is complete the Desktop is turned off and brought to a PC for downloading with RJL Systems “Logger” software via a USB or serial connection. 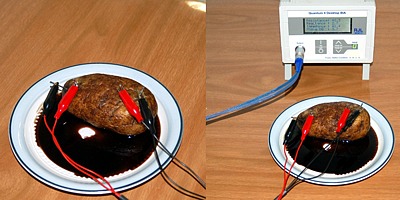 The black liquid leaked from the potato after thawing

Reactance is a measure of quantity and integrity of cell membranes because they have electrical capacitance. Cell membranes have dielectric properties that allow them to store a electrical charge that controls the metabolism of the cell.

Most vegetables or fruits are living organisms that die when they are cooked or frozen. A BIA instrument can directly measure the response of the cells to these destructive processes. Once the cells are destroyed they never recover because the vegetable or fruit is dead. The reactance and phase angle graphs clearly illustrate this as the potato returns to room temperature.